SBR’s Recognition Program is a continuous improvement program structured to help businesses reach achievable sustainability targets. We want to recognize your company for its sustainable business practices – those decisions that lower expenses and reduce the environmental footprint of  your company. We offer increased exposure for the exemplary accomplishments of leaders, initiatives, and organizations working to reduce the impact of their business on our environment and make positive contributions to our community. This animated video describes why and how you should apply! 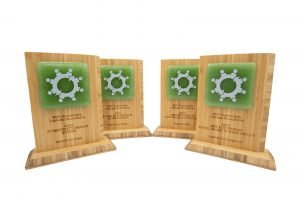 All SBR member companies that achieve at least bronze level receive a certificate from the SBR Board of Directors. This distinction will be announced at our annual marquee event, the Sustainable Business Summit, and be highlighted on SBR’s website and social media channels. In addition to the achievement levels, SBR recognizes outstanding projects described in Section 2 of the application. Outstanding projects selected for recognition will receive an engraved award that will be presented during SBR’s annual Summit. They will also be highlighted in widely disseminated paid advertisement in addition to SBR’s website and social media channels.

In addition, one individual is presented with the Eric Lindstrom Sustainability Star Award. This is presented to an individual who has gone above and beyond to create an environmentally and economically resilient Western New York. The honoree does not need to be a member of SBR to be considered for this award, however SBR members must nominate all candidates. The 2021 nomination form can be found here. 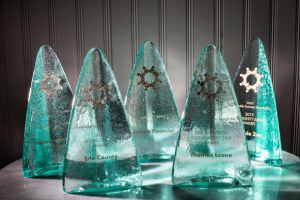 The organizations recognized at the 2020 Summit embody the SBR’s Principles to become a thriving and resilient business by establishing plans to reduce material waste, protect our waterways, optimize use of energy, and invest in our communities with an overall goal of reducing their footprint and becoming role models in the business community. The following companies were recognized for their outstanding work in sustainability.

In addition to overall recognition, three companies and one individual were recognized in specific categories: 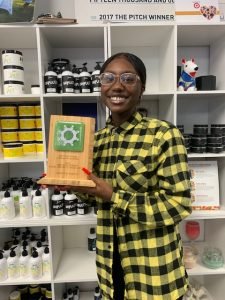 The 2020 Eric Lindstrom Sustainability Star Award was presented to Zandra Cunningham, CEO of Zandra Beauty, for her examplary efforts to  build a business based on sustainable products manufactured in Western New York. 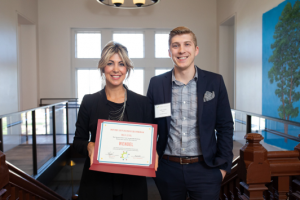 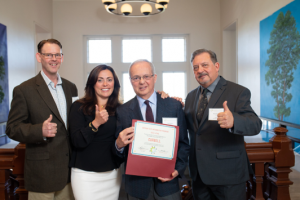 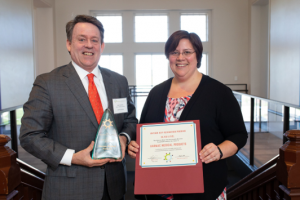 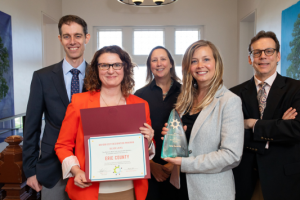 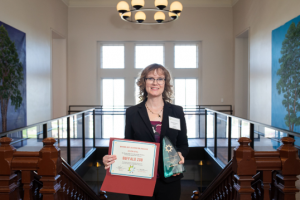 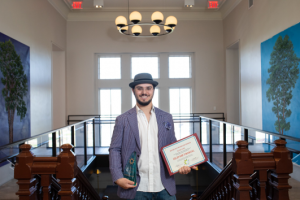 In addition to overall recognition, three companies and one individual were recognized in specific categories: 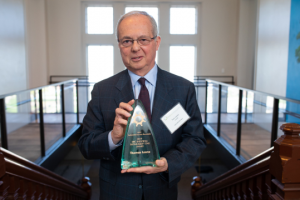 The 2019 Eric Lindstrom Sustainability Star Award was presented to Tom Leone, President of Curbell Industries, for his exemplary commitment to the advancement of sustainable business practices in WNY. 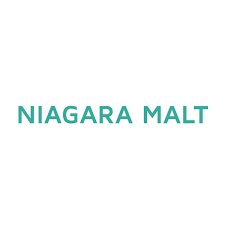 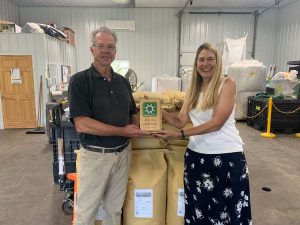 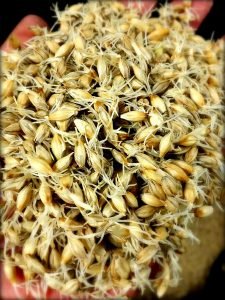 Niagara Malt has installed a wood pellet boiler and a hydronic heat exchanger to tackle the energy intense process of malting. Malting at Niagara Malt was originally supported by an all electric system, creating extremely costly electric bills. Niagara Malt soon took action by installing the boiler system, which reduced the company’s electric use by 65-75% and uses wood pellets (which is considered carbon neutral by the EPA). In addition, in 2018 Niagara Malt installed a solar rooftop system from Solar Liberty, which they had met at the 2018 SBR Summit. Through the combination of the initiatives, Niagara Malt has  generated a total of 20.28 MWh of electricity, saving an estimated 14,258 kg of CO2 emissions. As of March 2020, Niagara Malt has generated an excess of 1,240 kWh of electricity. 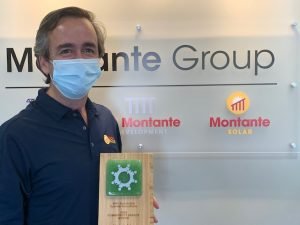 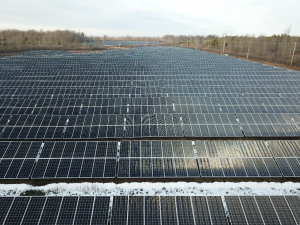 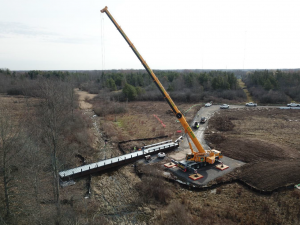 Montante’s awarded project is the “Solar Park 2”: 7 MW Community Solar Array located on Grand Island, NY. The project broke ground in March 2019 and is currently operational. This is the largest community solar array in WNY and produces 8,930,000 kWh annually, which has the capacity to power over 1,000 homes in the area. Montante partnered with the United States Army Corps of Engineers (USACE) and Department of Environmental Conservation (DEC) to plan around the protection of natural habitat and wildlife during construction. It built a bridge that spans over the state wetland that runs through the site in order to connect the two halves of the site and not disrupt the habitat. Furthermore, Montante integrated native plant species into the design and planted them among the solar panels to increase habitat for native pollinators, and also cut down on maintenance to the vegetation in the array. 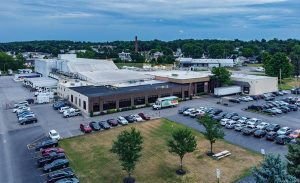 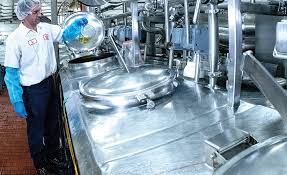 Perry’s most recent project is their 20-year continued upgrade to energy efficient lighting was the upgrade of their truck garage lighting in 2019. The purpose of this project was to reduce energy consumption – it replaced nine 400-watt HID fixtures with nine LED 162-watt high bay motion sensor light fixtures. The original light fixtures consumed an estimated 7,488 kWh annually, while the LED fixtures only consumed an estimated 3,120 kWh annually, a 58% annual energy saving. Perry’s installation of LED light fixtures in their Akron truck garage is in addition to their continued upgrade to more efficient lighting and their newest policy to replace light fixtures with LED technology when replacements are needed.

Perry’s has also implemented a new energy efficient heating process for heating their 20,000-gallon tank used for cleaning. They capture waste heat generated from their ammonia compressors that are used in their refrigeration process to heat the water used for cleaning, which needs to be heated to 140 ºF. The heat captured from the compressors is able to heat the cleaning water from 50 ºF to 90 ºF, saving 40 ºF of heat that would otherwise be generated through the use of natural gas. Through this process, Perry’s has saved 213,581,200 BTU’s annually which has saved 165,564 CCF of gas annually. This has avoided the release of 9.1 metric tons of CO2 annually.

Awarded 2019 Silver Level Recognition and Most innovative Sustainability Project for keeping 60,000 foam sheets and 20 cases of wipes out of landfill

“In 2018 our manufacturing and engineering group found that we were discarding 3,000 foam sheets and over a case of nylon wipes every week. The material was used to protect molded parts manufactured in one clean room, as they were transported to another clean room for final assembly. The engineering teams worked together with the operators to implement a process to save the packaging materials, return them to the warehouse and re-use them. While this seems pretty simple for most industries, Harmac had to implement this process in accordance with all FDA, and ISO 13485 regulations to ensure the integrity and quality of the product is not compromised. This process took about 6 months to implement, and has had a significant impact. In just 5 months we have saved almost $30,000 by reusing the materials, and have kept 60,000 foam sheets and 20 cases of wipes out of landfill. One of the most rewarding pieces of this project, is that it was completely driven by manufacturing and not the EH&S department or Green Team.” 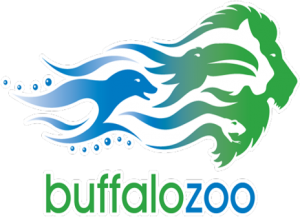 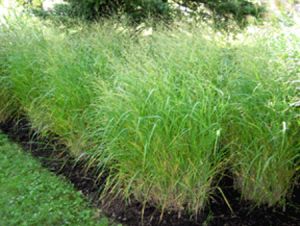 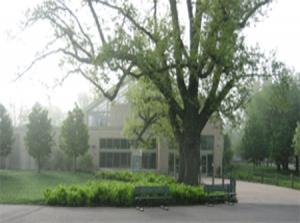 “Though the Buffalo Zoo’s primary collection includes animals from every continent, we also have an impressive botanical collection.  The Zoo’s 23.5-acre campus is situated in Delaware Park, one of the premier Olmsted Parks in Buffalo. To maintain the park-like atmosphere, our public spaces are well planted.  Exhibit spaces also require select plantings. One of the Buffalo Zoo’s sustainability goals is to increase the number of native plant species at the Zoo by 5-10% each year over the course of 5-10 years.  Planting natives reduces the need for watering and attracts fewer unwanted pests, thereby reducing the need for pesticides.  To reach this goal, any perennial planted must be a native species. This has led to the creation of pollinator gardens with 15 different pollinator species to attract birds, bees, butterflies, and other pollinators.  In addition, we have eliminated several invasive plants such as Japanese honeysuckle and obedient plant.  Rather than using harmful herbicides to eliminate weeds, we use a “weed dragon” that utilizes heat to kill weeds.” 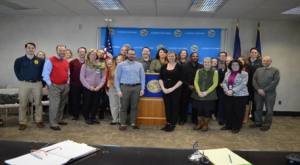 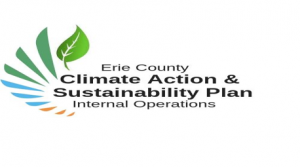 “Erie County developed a Climate Action & Sustainability Plan (CASP) for internal operations as a blueprint of actions the County can take to mitigate its production of greenhouse gases (GHG) and lessen its contribution to climate change. The CASP contains overall GHG emission reduction goals, which were originally aligned with those of the Paris Agreement, 26-28% by 2025 based on a 2005 baseline. After a GHG inventory showed that the County’s internal operations has reduced its emissions by 27% (already fulfilling the Paris goals), the Core Green Team set new aggressive yet achievable reduction goals against the 2005 baseline. The goals were set over three time periods:  Short-term (2020) – achieve 32% overall GHG emissions reduction, Mid-term (2025) – achieve 50% overall GHG emissions reduction, and Long-term (2040) – achieve 80% overall GHG emissions reduction. By following the actions recommended in the CASP, Erie County can create financial savings, keep dollars in the local economy, support new jobs, improve air quality, and attract and retain dedicated public servants.”